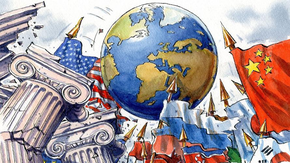 ​To say that we live in an era of renewed "great power competition" (or "strategic competition!") is hackneyed. Nevertheless, it contains important insights: after several decades as the world's sole superpower, the United States confronts growing security competition in Europe and, especially, Asia.  What does this mean for U.S. grand strategy - the United States' overarching 'theory' of how to create security for itself using the tools  at its disposal?

Ongoing research tackles this question head on.  One issue concerns whether the United States can sustain a "primacist" grand strategy and strive to remain the world's sole superpower.  In a report for the Center for a New American Security, I assess the broad sweep of American strategic primacy, identify its problems, and suggest a course correction is in order.

Further research imposes order on a complex contemporary grand strategy debate. Here, a short article in the Texas National Security Review with Emma Ashford underlines the strong continuities in the Trump administration's approach to great power competition with prior U.S. administrations. More directly, a project coordinated by scholars from the Norwegian Defence College - published with Routledge - assesses areas of overlap and disagreement among different grand strategies under discussion today before considering their respective merits and drawbacks; although no single grand strategy is without problems, plans to sustain U.S. primacy in an era of competition are particularly problematic. My plan is to extend this research into a broader assessment of U.S. grand strategic alternatives and their suitability for a period in which great power tensions are on the rise.

Above all, a recent piece in The Washington Quarterly underscores the new grand strategic conversation emerging in the United States.  Where "primacy" - that is, a drive to block the emergence of new great powers - was the crux of U.S. efforts in the 1990s-2000s, the last decade has seen most strategists tacitly concede primacy failed; after all, if China is a now a peer competitor (as many argue), then by definition grand strategic primacy did prevent new great powers from arising!  Instead, and without much fanfare, we currently see the emergence of a new grand strategy of "neo-primacy": a drive to reclaim the sorts of geopolitical advantages enjoyed by the United States in the 1990s-2000s by bolstering areas of U.S. strength, undercutting Chinese capabilities, or both.  The results carry profound implications for national and international security (explored in more detail in future work).

To do so, we further need to consider how great power competition may evolve in the future, and its implications for the United States. With support from a fellowship from the Woodrow Wilson International Center for Scholars, closely-related research examines the different types of great power competitions (e.g., economic, military, ideological) that can occur in theory and/or practice; assess their particular dynamics; evaluate the U.S.-China contest (for preliminary thinking, see this policy piece with Ben Friedman) among this typology; and consider the strategic options for the United States. The intent is to simultaneously contribute to scholarship on international competitions in general, while rigorously engaging a core issue in the contemporary grand strategy discussion.
Powered by